Hot Topics
Do You Want To Enter Thailand Like A VIP?...
10 ‘Must Do’ Things Before Leaving Your Country
Top 10 Reasons Why I Prefer AirBnB To Hotels...
When and How Should You Travel to Thailand
Cost Analysis of Your Dream Trip To Thailand
10 Reasons Why Thailand Is ‘The’ Destination For 2021 The Ultimate Guide To Top 10 Spectacular Mosques in UAE

The Ultimate Guide To Top 10 Spectacular Mosques in UAE

Did you ever think that the UAE only has modern skyscrapers and artificial fountains to offer a traveller? Let me introduce you to the rich culture and architechture of the Middle East. The Top 10 Sectacular mosques in UAE are some of the finest examples of Islamic architecture the world has seen.

The sight of a beautiful mosque in the UAE brings to mind this region’s healthy blend of tradition and modernity. I agree, the Tall skyscrapers rule the skies in the UAE but it’s the mosques that provide a mute testament to the true heart of its residents.

So, I consider these mosques not only ornate palaces built for the worship of god, but also held in great regard by the local populace. As far as tourists and expats are concerned, they simply cannot get over the magnificence and the sheer opulence of these mosques.

Here are some of the most magnificent and magnificent mosques in the UAE. Hence, I am sure you will be spellbound once you see them for real.

Good Reads: Things you should know before traveling to Thailand The Grand Mosque Dubai boasts of the tallest minaret in the whole of Dubai. Rebuilt twice since 1952, the Grand Mosque in Bur Dubai is one of the UAE’s oldest mosques in the UAE. The mosque’s grand minaret and its astounding architecture plus its peaceful surroundings make it worth visiting.

I would recommend you to visit it by night, when the mosque is spectacularly lit up with colorful lights; it’s the best time to take awesome pictures of the Grand Mosque, Dubai.

The mosque has intricate blue mosaic work inside. At the entrance, carved into the walls are five large Quranic inscriptions. There are 9 large domes and 45 smaller ones, with fine geometrical carvings. The wooden shutters that close the mosque’s many windows are beautifully handcrafted. 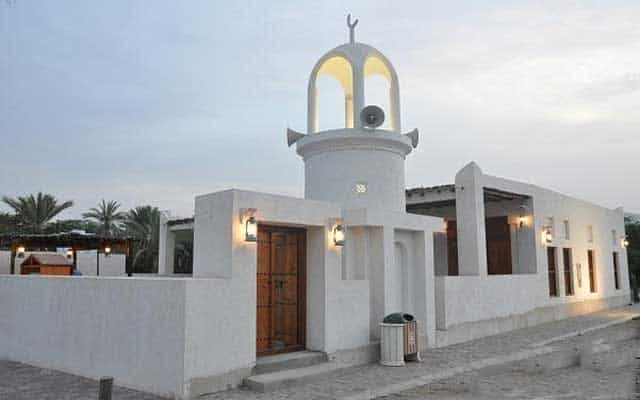 This is the mosque whose image you’ll see imprinted on the Dh5 bill. Salem Al Muttawa Mosque is located at the heart of Khor Fakkan. Built around 200 years ago, the mosque was fully renovated in March 2011. This mosque isn’t named after a ruler – rather, it has been named after a resident who never missed a single call to prayer. That’s awesome to know, isn’t it?

The mosque is built in a simplistic style. It’s a small white building of stone, overseeing the mountains. It was built out of the old trunks of palm trees and old stones. The Salem Ali Muttawa mosque characterizes the tenets of Arab origin and is therefore valued as one of the top mosques of the UAE. This is one of the oldest mosques in the Middle East of great historical and spiritual significance. The grand mosque’s white marble exteriors, its 82 domes and 4 minarets look like something out of a fairy tale in the surrounding reflective pools. The white marble columns in the courtyard are are carved and embedded with semi-precious stones. The delicate floral mosaic is indicative of the gardens of heaven. Several large chandeliers made out of Swarovski crystals hang from the roof within.

The grand mosque houses the world’s largest handmade carpet which took hundreds of Iranian artists months to create. The mosque is lit with multi-coloured lights at night, with artificial clouds backing it. While creating a surreal effect, this display is meant to signify the phases of the moon.

You can visit this mosque from Saturday through Thursday between 9 a.m. and 9:30 p.m., with your camera. The Sheikh Zayed Grand Mosque is one of the top UAE mosques that you must visit. 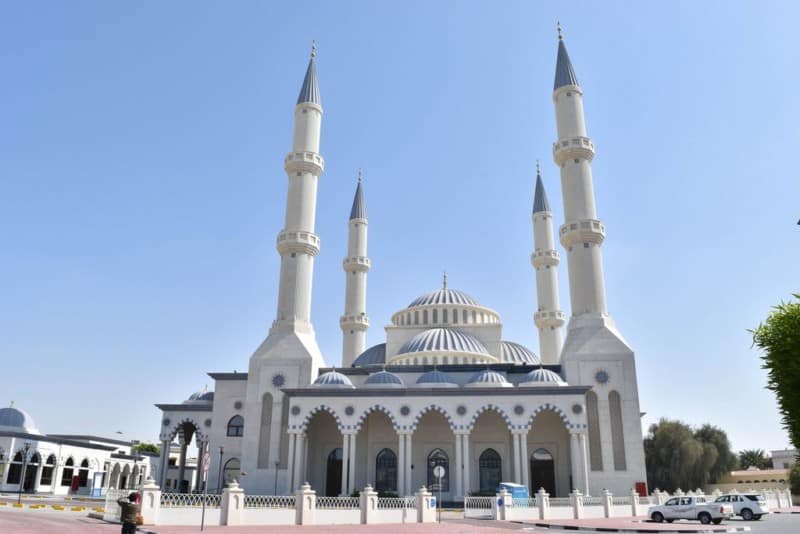 The Al Farooq Omar Bin Khattab Mosque, also known as the Blue Mosque is the largest mosque in Dubai. Located in the verdant Al Safa area, the mosque’s construction is based on Turkey’s historic Blue Mosque. The mosque displays a mix of Andalusian and Ottoman styles of construction. Its name is derived from that of Umar bin Al Khattab, Prophet Mohammed’s companion who became the second Caliph after Abu Bakr.

The mosque can accommodate almost 2,000 worshippers and its doors are open to non-Muslims as well. There’s a traditional-style fountain surrounded by colourful tiles at the front entrance. 60 Moroccan craftsmen from the city of Fez, inscribed sayings from the Quran into the walls of the mosque. I am told that the mosque’s carpets were manufactured in Germany. The structure comprises of 21 domes, 4 minarets and 124 stained glass windows.

The Blue Mosque was opened in 2011 to bridge the gap between Muslims and non-Muslims by promoting the values of creativity, tolerance, moderation, leadership, peace, and harmony. It’s a great place to learn about Islamic culture and heritage. Classrooms, a library, youth club and lecture hall where free weekly Arabic lessons are held are all part of the mosque. The Al Noor Mosque in Sharjah is the city’s most beautiful structure. It towers over the Buhairah Corniche, and 34 cascading domes all built in the Turkish Ottoman style. The mosque was constructed by Sheikha Jawaher bint Mohammed al Qasimi, wife of the Ruler of Sharjah.

The Al-Noor Mosque is open to non-Muslims; in fact it’s the first mosque in Sharjah to do so. This mosque was designated as the ‘Capital of Islamic culture’ in 2014. The mosque’s beautiful minarets reflect gloriously on the Khalid Lagoon. The architecture is inspired by the Blue Mosque in Istanbul. There are 34 magnificent domes, semi domes, and minarets that cascade in size, in the classic Turkish Ottoman style. The mosque can hold 2200 people at a time; there’s a separate ladies section as well.

You can visit the mosque at 10 A.M. on Mondays, and enjoy an hour’s tour, taking pictures of the striking architecture. Built in the 15th century, the Al Badiyah Mosque is also known as the Ottoman Mosque. It is the UAE’s oldest mosque, is located on a hillside next to a traditional fishing village of the same name. Built in 1446, the mosque is just 15 feet tall, with a total area of 570 feet.

Originally constructed out of stone, it was laid on with burnt mud and then coated in whitewashed plaster. Unlike other mosques, this one is square-shaped; the roof contains four domes that rest on a central pillar. Even though it appears small, it can hold up to 70 people during prayer calls.

The area around the mosque has been inhabited since 2000 BC; visitors come here to examine archaeological finds of all kinds. The King Faisal Mosque can accommodate up to 17,000 people and is one of the largest mosques in Sharjah. It’s also the third largest of the mosques in the UAE. The sheer grandiosity of the mosque captivates visitors. King Faisal was reputed to be a progressive man, who abolished slavery in the kingdom and allowed women to attend school. During Ramadan, various lectures take place on the Quran. The mosque also contains a library where you can study Islamic philosophy. The mosque takes up an area of 2,500 square metres and contains many rooms and halls. There’s a library containing more than 14,000 books on diverse topics in many languages. The Sheikh Mohammed Centre for Cultural Understanding conducts four tours every week of the mosque that non-Muslims are welcome to attend. The Masjid al Rahim Mosque stands on the banks of the Dubai Marina, adding to the incredible architecture all around it. It’s the only mosque in the Dubai Marina area, with a single dome that represents the vault of heaven in Islamic architecture. There’s a tall minaret as well but no additional domes or minarets as with other mosques.

There’s a patio surrounded by a double wall, one of which is latticed. The exterior that’s open to the Marina is surrounded by a beautiful waterfall. At night, the mosque is lit up in blue and white, making it stand out from the other buildings along the Marina.

The Al Salam Mosque comprises the best of three styles of architecture – Emirati, Andalusian and Ottoman. This mosque is a masterpiece of Islamic architecture, visible from a distance owing to its brightly lit minarets. It can hold 1,500 worshippers at a time.

A single large main dome with several smaller domes set on cascading roofs is the prominent style of this mosque. The effect is that of a single main structure with several cascading structures on both sides. The exterior of the mosque is coloured a bright ochre. When lit up at night, the mosque gleams like a golden palace with accents of red. This mosque was constructed in the medieval style of Fatimid. The mosque’s exterior is constructed of white marble. A single main dome is ensconced between two tall minarets. The roof of the prayer hall rests on several marble columns. This is one of the first mosques in the country to receive non-Muslim visitors.

The Sheikh Mohammed bin Rashid Center for Cultural Tours organizes a 75-minute tour of the mosque from Saturday to Thursday. Photography is permitted in the grand mosque. The nightly views of the mosque when it’s fully lit up are magnificent and well worth obtaining a UAE visit visa to go on a tour of mosques in the UAE.

These are the grandest and the most beautiful mosques within the UAE. Non-Muslims can visit several of them and even experience cultural tours at some of these mosques. Each mosque is a testament to various tenets of Islamic architecture. Why not take a tour of UAE’s mosques and study the intricacies of the architecture, which is tied up with the spiritualism of the Islamic religion? You’ll learn a lot about the UAE this way.

Neha Singh is a postgraduate in Mass Communications, who loves everything about life. Traveling is extremely close to her heart and writing came to her naturally. An avid trekker & explorer, who often takes off some time from her busy life for mountaineering.
She loves meeting new people & gets attached to their culture very easily. Her ambition is to explore as many places as she can in her life. She strongly believes in Gandhian principle – “simple living high thinking”.
Are you looking at travelling to the Far-East as well? Check out my series of posts on Thailand. Links of a few are as below,
https://travellingsands.com/is-thailand-a-family-destination/
https://travellingsands.com/10-reasons-why-thailand-is-the-destination-for-2019/
abudhabidubaisharjahuae
0
FacebookPinterestLinkedinRedditWhatsappTelegram
previous post

Do You Want To Enter Thailand Like A VIP? Get This Visa

This site uses Akismet to reduce spam. Learn how your comment data is processed.

This website uses cookies to improve your experience. We'll assume you're ok with this, but you can opt-out if you wish. Accept Read More 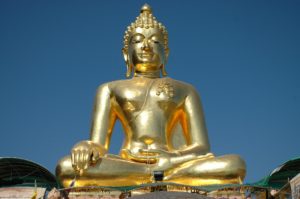